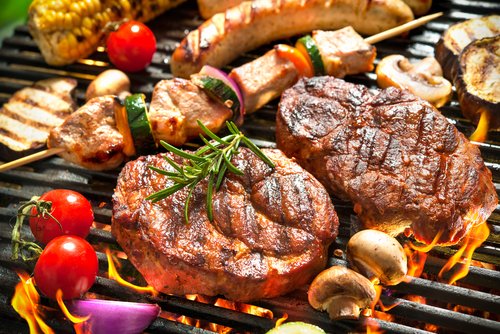 Look in the supermarkets nowadays and you’ve got a protein version of everything (I’m pretty sure someone mentioned protein beer to me once, though it sounded disgusting). The typical western diet has lead to increases in weight gain, BMI and more instances of problems relating to a poor relationship with food. In this article I’m going to discuss in layman’s terms why protein is so useful when trying to keep a lean, healthy and athletic figure/physique.

Most people’s diets are heavily carb and fat laden and often have inadequate protein. The problem isn’t that carbohydrates and fats being inherently fattening or anything, but many of the foods that people eat are poorly satiating and have very high calorie density (containing many calories relative to the amount of food consumed). In western culture, our diets often consist of very palatable, gourmet foods that taste great but are far to high in calories and many of which contain little to no useful nutritional value.

Let’s take a couple of classic examples that people might consume on a daily basis:

Pint of beer – Average 250 cals – people usually have more than one. Lacking completely in micronutrients, filled with simple carbohydrates that don’t fill us up and dehydrating.

A pack of nuts 100g – typically 400-500 calories…although a potentially healthier food in terms of micronutrient value, it’s a lot of calories for a modest sized portion of food and easy to pick on and overeat.

The above 3 examples demonstrate that there is high amount of calories in some of our everyday simple food and drink. Many of us will eat these sorts of things blissfully unaware of just how much food we’re eating.

So why is protein so important?

The good news about protein is that of the 4 macronutrients (Carbohydrates, fats, protein and alcohol) Protein is the most filling and satiating. The more satisfied and full you are from your food, the less chance of you getting hungry for high quantities of calorie dense food repeatedly. A meal consisting of a lean chicken breast and green veg granted may sound bland but it will fill you up much more than a couple of bananas worth the same amount of calories.

Your body burns calories through everyday physiological processes. One of those is the digestion of food. High protein-based foods typically take longer to breakdown (depending on the source and type) than a lot of other foods. This creates what’s known as the thermic effect of food where your body expends more calories digesting than it normally would, although this effect is only a slight net increase in daily calorie burn, adding it to other things like activity levels can help add that calorie burn effect up.

If you want to create a great figure or physique, you need a wide spectrum of amino acids that are the building blocks of proteins. Protein enables us to build and preserve lean muscle mass, not just leave us ending up scrawny and looking undernourished.

Insulin is a hormone with a bad reputation but unjustly so (in the right context). Insulin isn’t just released as a response to balancing blood sugar, it’s also released as it plays a role in satiating us after a meal. Protein is a potent stimulator of insulin but NOT blood sugar levels. A rapid increase in blood glucose from simple sugars raising insulin creates a different effect to that of protein whereby you get sharp rises and falls in insulin that may be attributed to repeat bouts of hunger and overeating. The raising of insulin from protein creates a satiating effect that lasts much longer preventing overeating and leaving us full and less likely to overeat.

Check out the insulin reputation series – explains this better than I do in this article. Protein is a potent insulin stimulator but the effects are different to that of simple carbs.

The rules may be different between lean and unhealthy test subjects but this is some really interesting reading around insulin.

At Roar, one of the things we get people to do is eat more protein than they are used to. A low carbohydrate diet which is higher in fat and protein is great for hormone regulation but also feeling full in general. Both fat and protein make a very satiating combination. Many of the foods on a Roar based diet plan are low in calorie density. That means you might eat a lot of something but not end up having that many calories which is a great way can be able to deal with hunger.

How to get more protein in your diet

This may sound painfully obvious but having a food diary can be great to track how much protein you’re getting. Using something like Myfitnesspal can be used to ensure you track your protein intake and are measuring out meals and portions correctly.

Start thinking about your diet in advance and planning your days out, not just eating things on a whim or buying at random.

Start consuming more lean fish and lean meats as a part of your meals. You can have eggs for breakfast instead of cereal, you’ll certainly feel fuller for it and be getting some great nutrients. A protein shake after your workout can boost protein too but it’s best practice to get the vast majority of protein from solid food sources as they fill you up much more.

Hear at Roar, we meticulously plan nutrition for our clients by ensuring that not only they have a list of the best protein sources and supporting foods to eat but also the quantities and portion sizes that are going to satiate their hunger and create an environment for rapid fat loss.