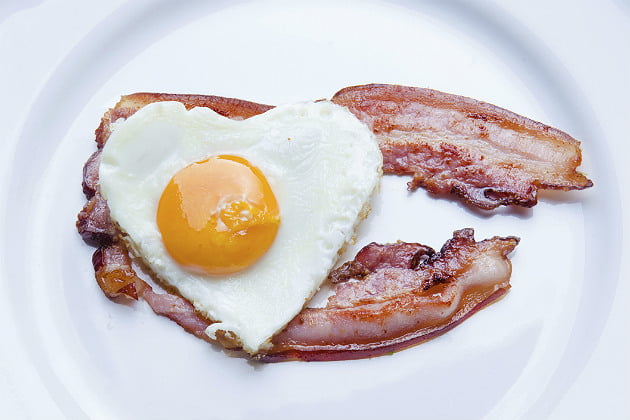 Cholesterol is at the centre of an all-out demonization: popular belief, mainstream media, dieticians, nutritionists, doctors…all are convinced of the harmfulness of this omnipresent molecule in animal flesh.

All this nonsense stems from a biased epidemiological study published in 1953 by the Dr. Ancel Keys, a study known as the Seven Countries Study. It seemed to demonstrate the direct link between saturated fat consumption and the prevalence of coronary heart disease. In reality, the available statistics at that time were drawn from 22 countries and if the calculation was re-done today on the same statisticalbasis, but widened, we would obtain a diametrically opposed result, that is, there is no link between saturated fat intake and cardiovascular disease.

This being said, the goal here is not to just dispute historical studies but to set the record straight. Rather, it is simply to look at the facts and discuss some physiology. It has been clearly established that a cholesterol level below the official normal range is associated with increased mortality, especially related to suicides (nervous system disturbance) and cancer (altered immune system). I do not deny that some risks increase with excessive cholesterol, however the relationship of cholesterol to morbidity (illness), and cholesterol to mortality, represents a U-shaped curve, just like almost all biological parameters in fact. After all, there is nothing really revolutionary in saying that, in biology, reaching a balance constitutes the Holy Grail.

In addition for all those who remain convinced of the dangers of cholesterol, how do they explain the most recent epidemiological study of patients over 80 that clearly demonstrates a higher life expectancy for those with higher cholesterol? So if that is true, when are we supposed to suddenly switch from cholesterol being as low as possible, to the opposite: 60 years, 65 years, 70 years or 75 years old?

Let’s be reasonable: just consider the many physiological roles of cholesterol. Without it as an inescapable precursor of all steroid hormones (there is a good reason it ends in “sterol”), there would be no sex hormones (œstradiol, progesterone, and testosterone) and no adrenal hormones (glucocorticoids or 17-hydroxysteroids, 17-ketosteroids, or mineralocorticoids). Also without cholesterol there would be no bile acids and therefore no bile salts to emulsify and digest fats.

Without cholesterol, we lose a fundamental component of brain tissue: in the words of the French cardiologist Michel de Lorgeril: “The brain adores cholesterol”! Patients suffering from a deficiency in cholesterol, congenital or not, develop cognitive disorders (memory and/or impaired intelligence). Consequently, should we be surprised at the side effects of statins those very fashionable cholesterol-lowering medications that often result in memory disorders sometimes confused with the onset of Alzheimer’s?

Without cholesterol, cell membranes loosen their structure, so much so that increased consumption of omega 3 fatty acids has the capacity to slightly lower blood cholesterol. The reason is that cholesterol must then be incorporated into cell membranes to give them more consistency in response to the greater flexibility of the membrane brought on by the polyunsaturated fatty acids.

In addition, the lack of cholesterol compromises the proper functioning of the intestinal mucosa and therefore its capacity to absorb nutrients, especially fat-soluble vitamins (A, D, E & K), coenzyme.